Develop a set of posters and t-shirts for students in the College of Liberal Arts to wear. 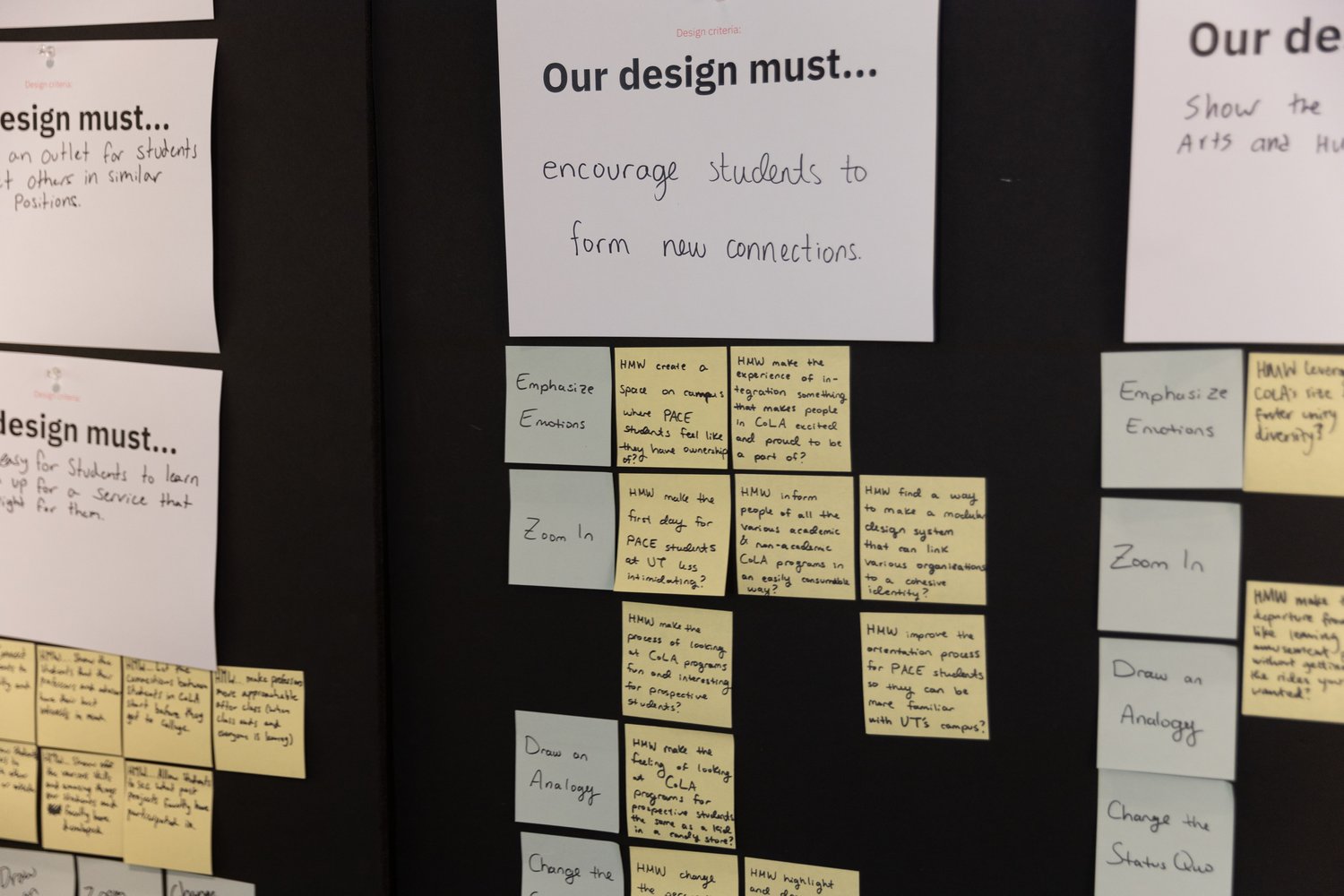 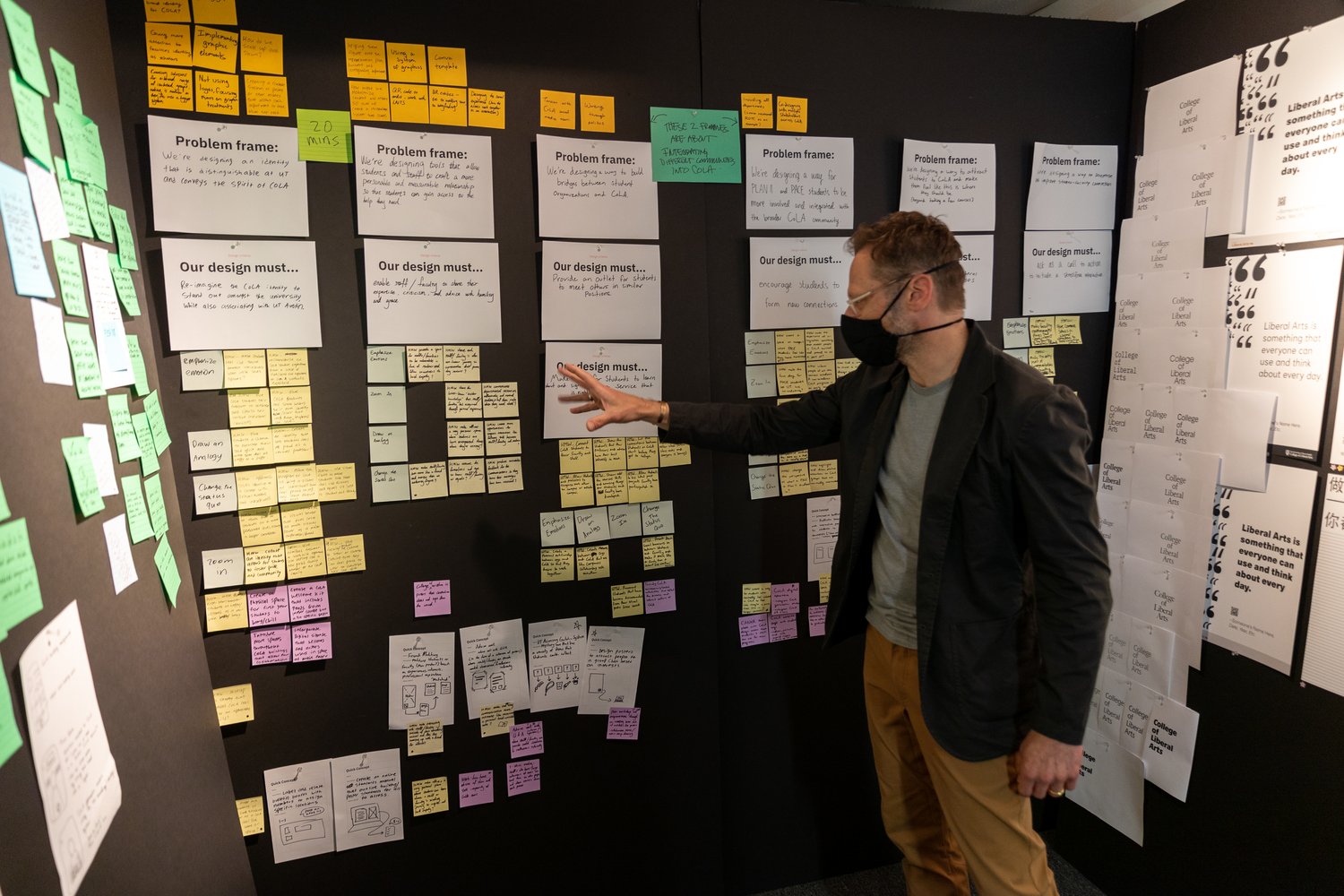 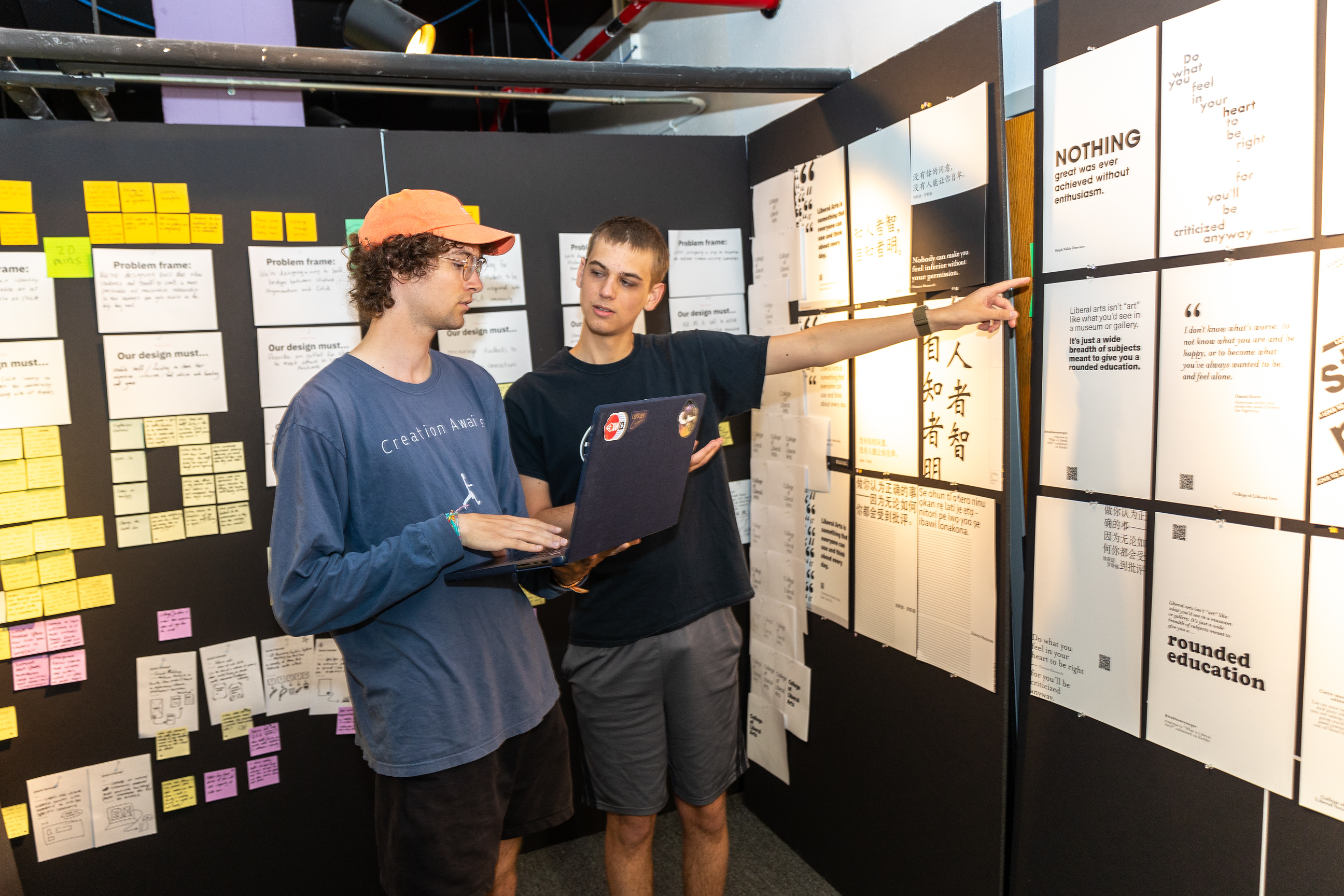 When prompted with the initial task of being asked to develop shirts and posters, our professor Jon Freach said: "this may be too simple." Our interviews with stakeholders, however, debunked this initial claim of being too simple; students and faculty revealed a deeper problem in the College of Liberal Arts: a identity crisis. At any college across America, the Liberal Arts department or college is perhaps the biggest, housing a hodgepodge of majors and differently minded people. Our research made it clear that we needed to investigate further into what made Liberal Arts majors at UT Austin more interconnected and one whole unit.

A lot of students we interviewed said or realized that they didn't even realize they were in the College of Liberal Arts, and just instead picked the major they liked. This was a common theme amongst students and faculty stakeholders, one that carried and drove our research and mission to create a sense of identity for the whole college to rally behind. Faculty also discussed that a lot of the students taking Liberal Arts courses were non-majors, mainly for their core curriculum requirements. Faculty thought the college was essential for the breath of the university's mission of preparing students for the real world, but emphasized that students didn't really feel the same way. 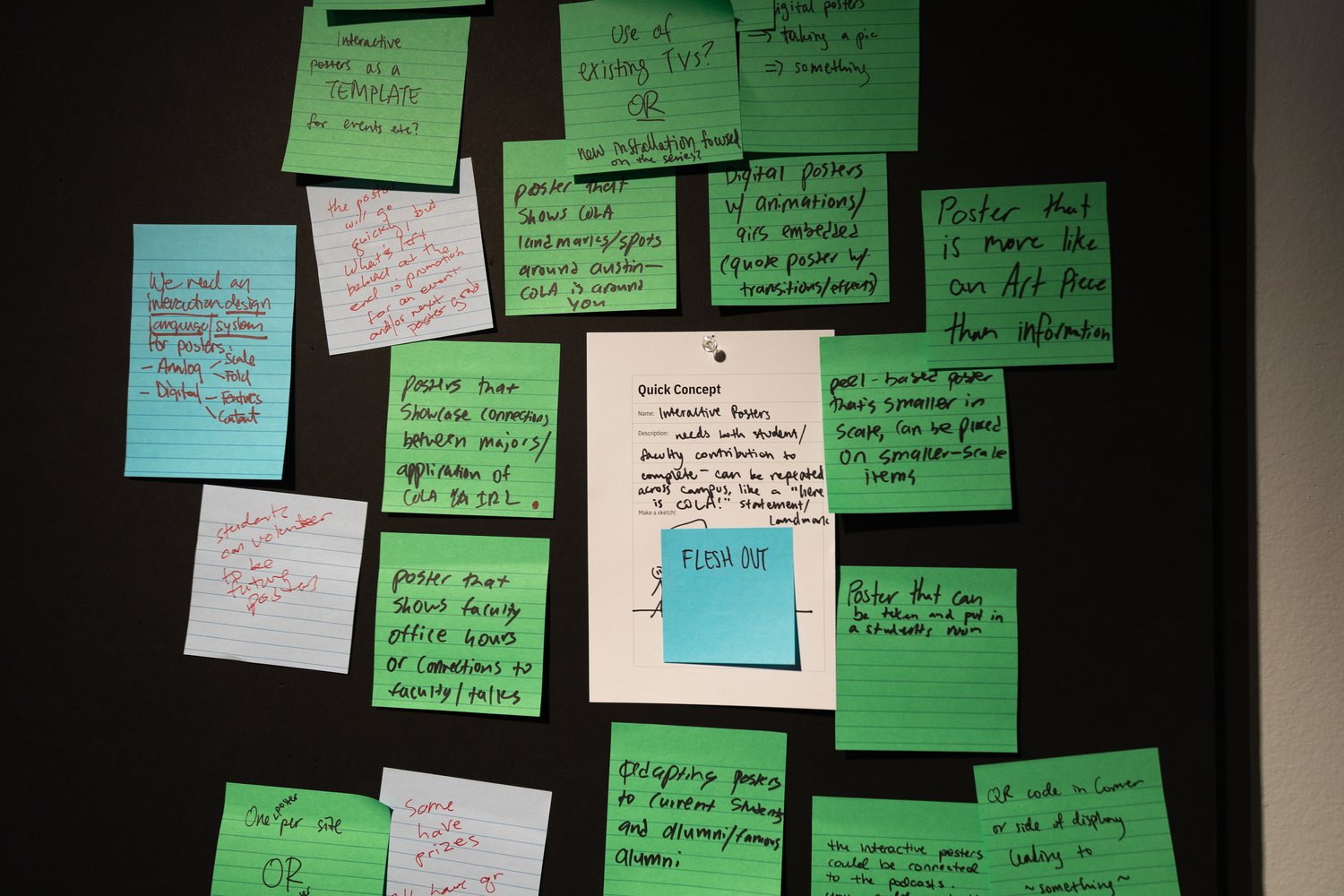 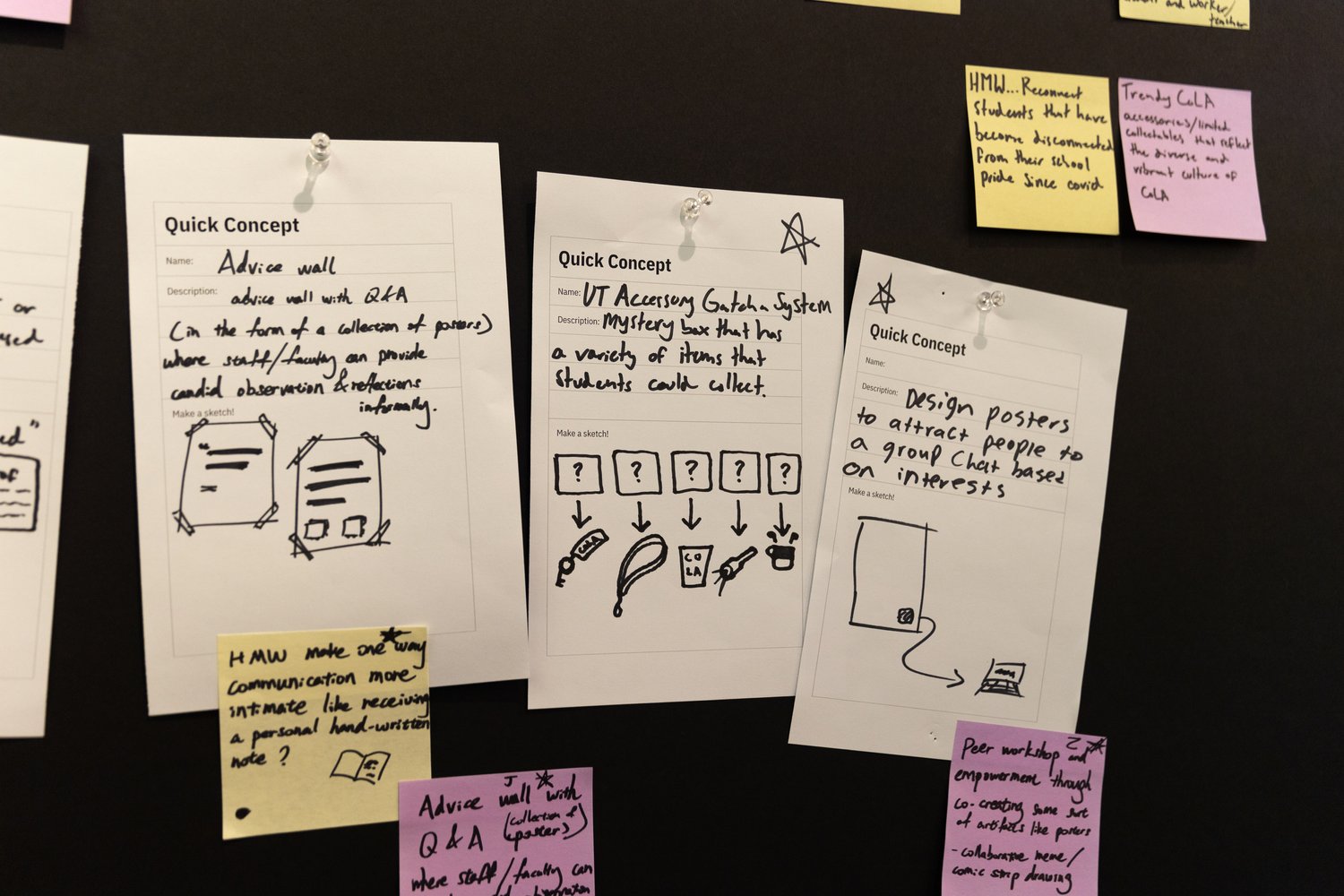 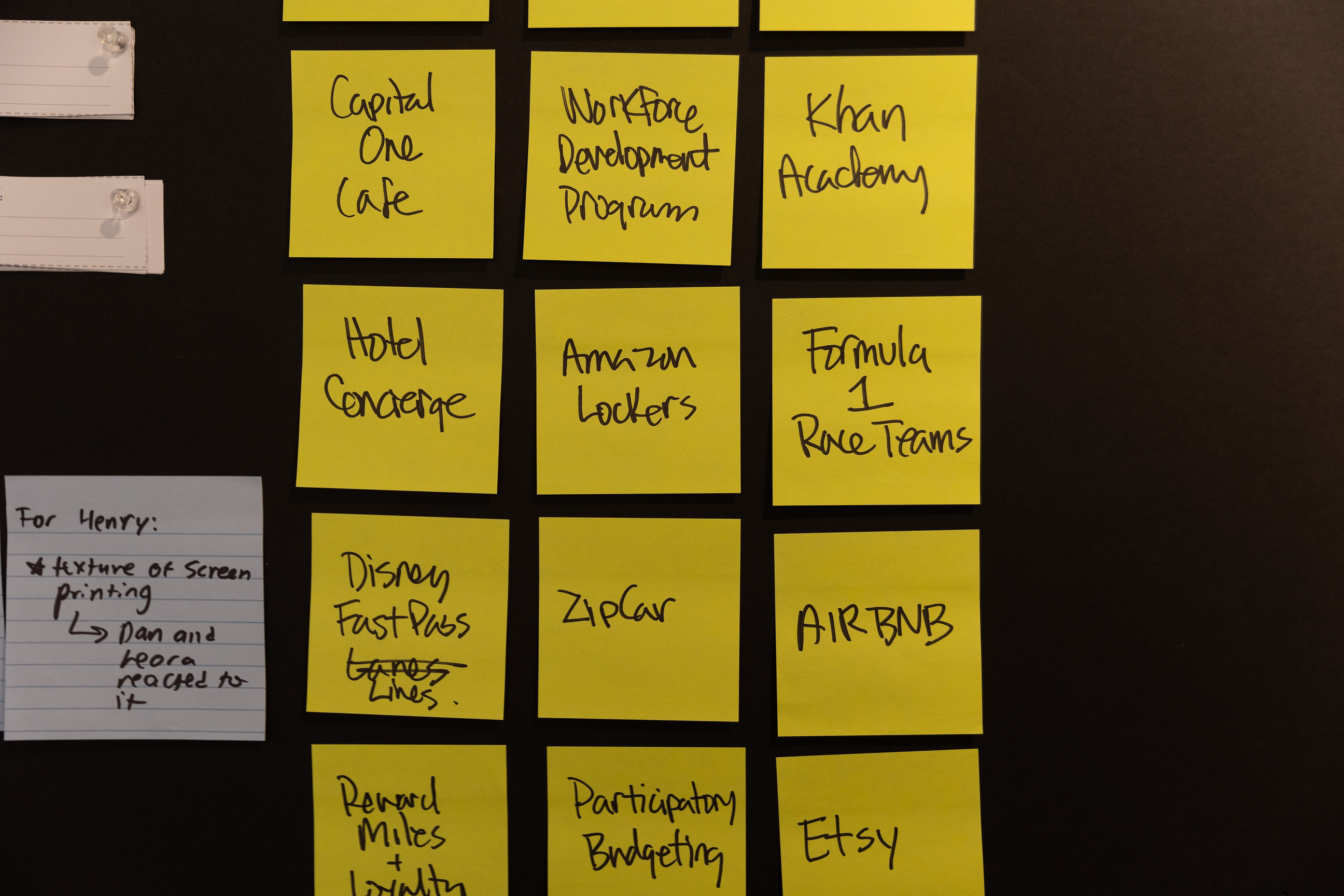 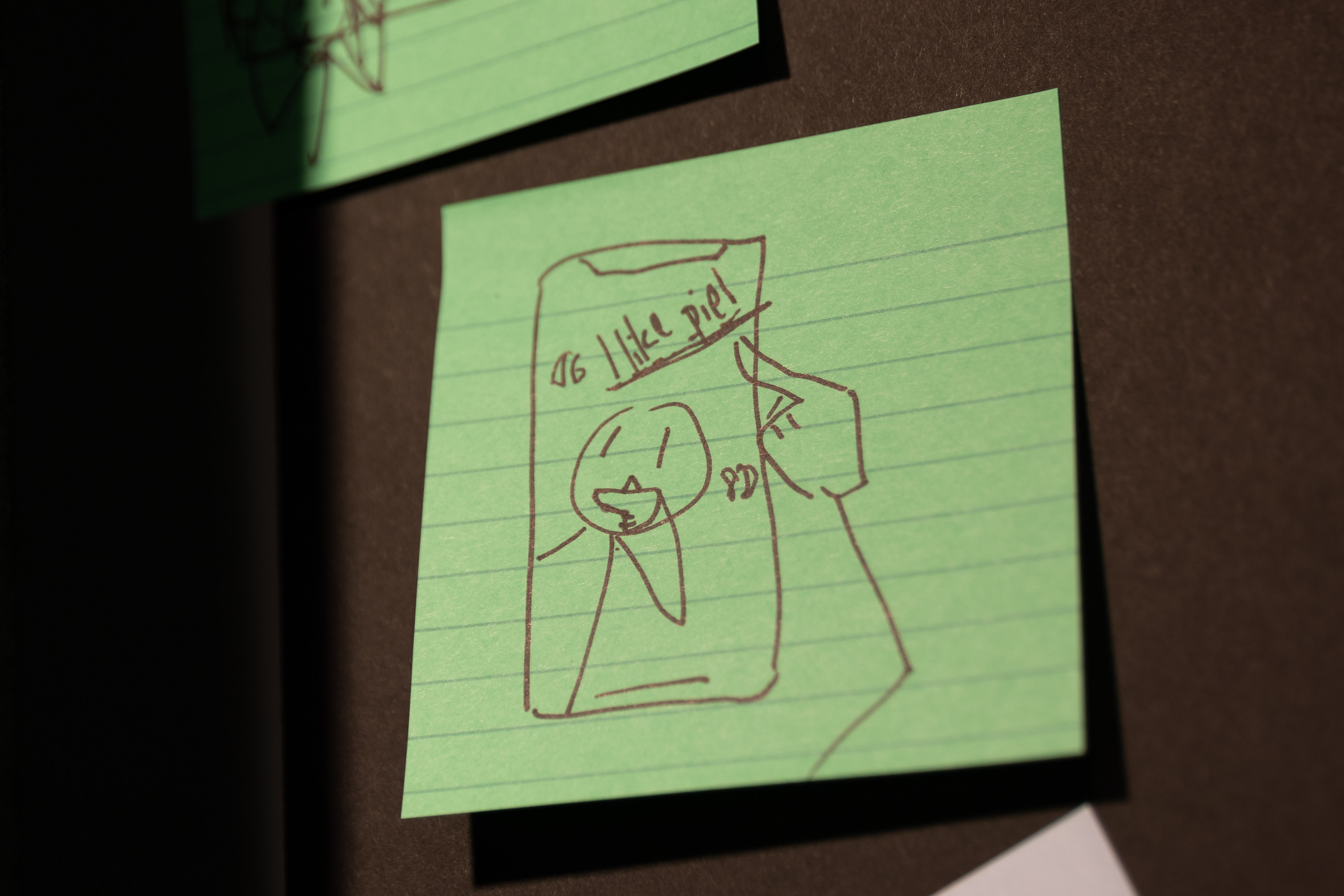 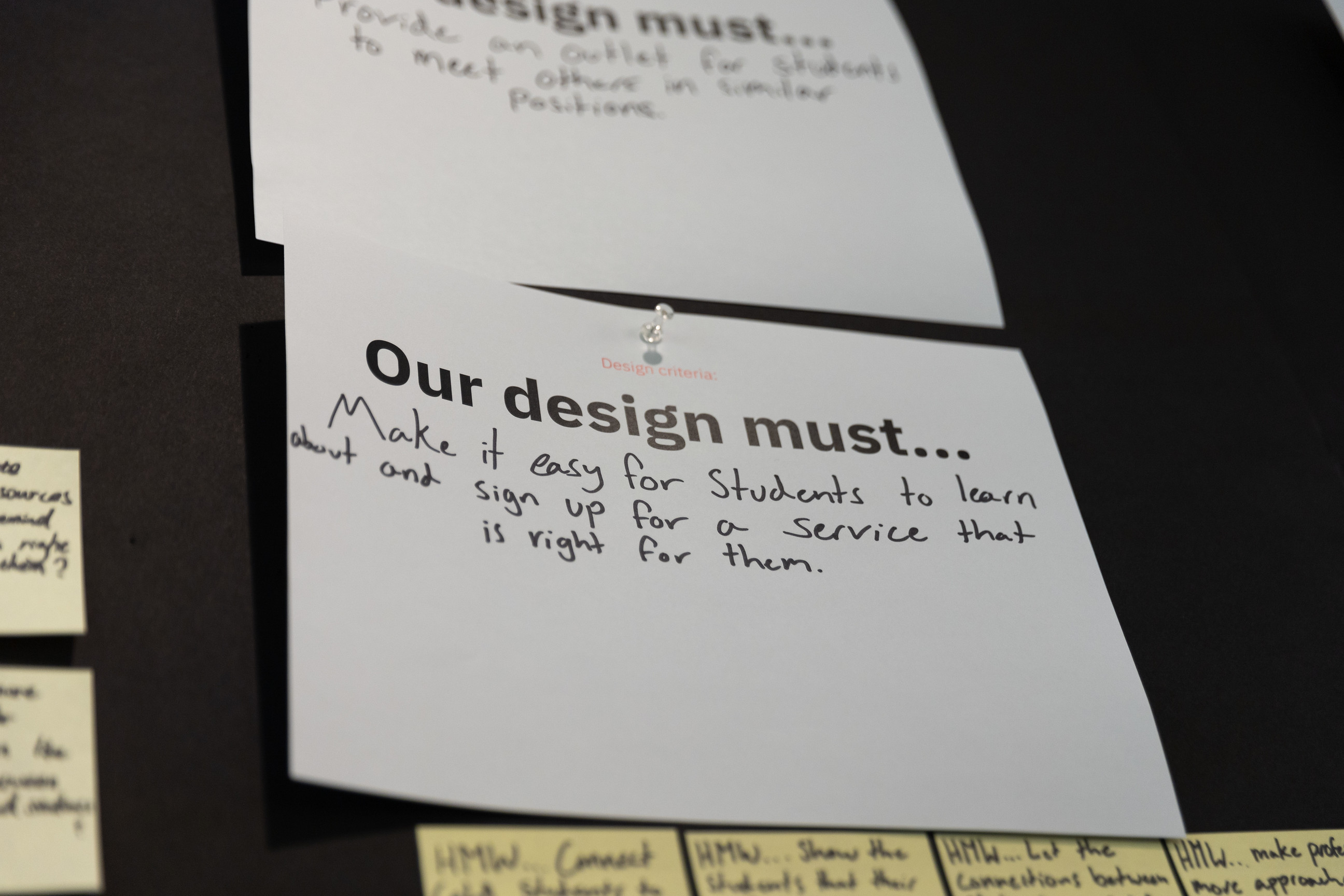 The ideation from research spawned speculative and concrete concepts that expanded on the initial ask of posters, while also establishing elements of community. Concepts included publicizing office hours of professors to encourage more cross-disciplinary communication of students, utilizing digital signage to have class advertisements to get more people excited about the college's offerings, among other things. These concepts continued to get refined and combined, in some cases, through co-design sessions with the stakeholders of the college. 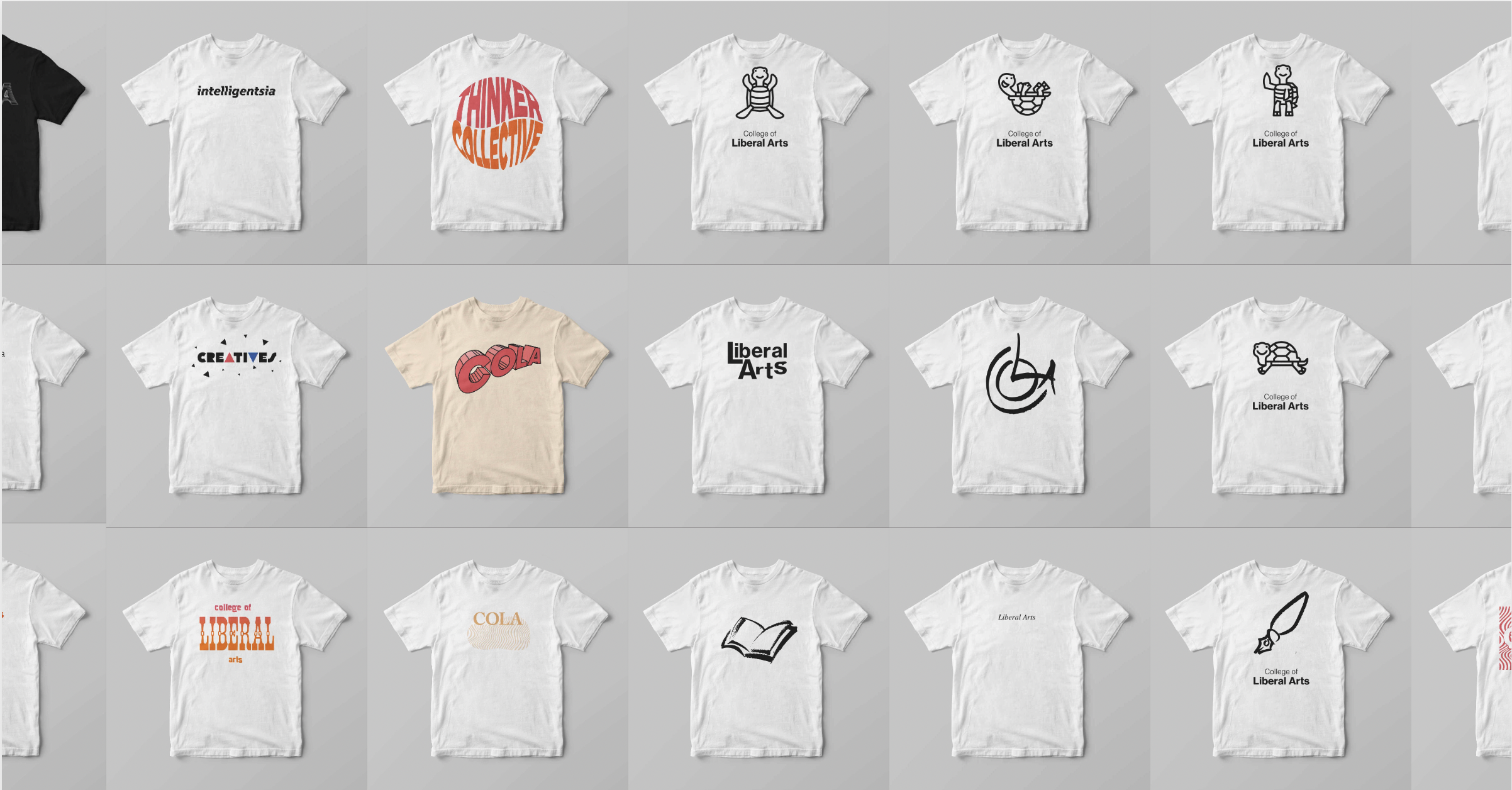 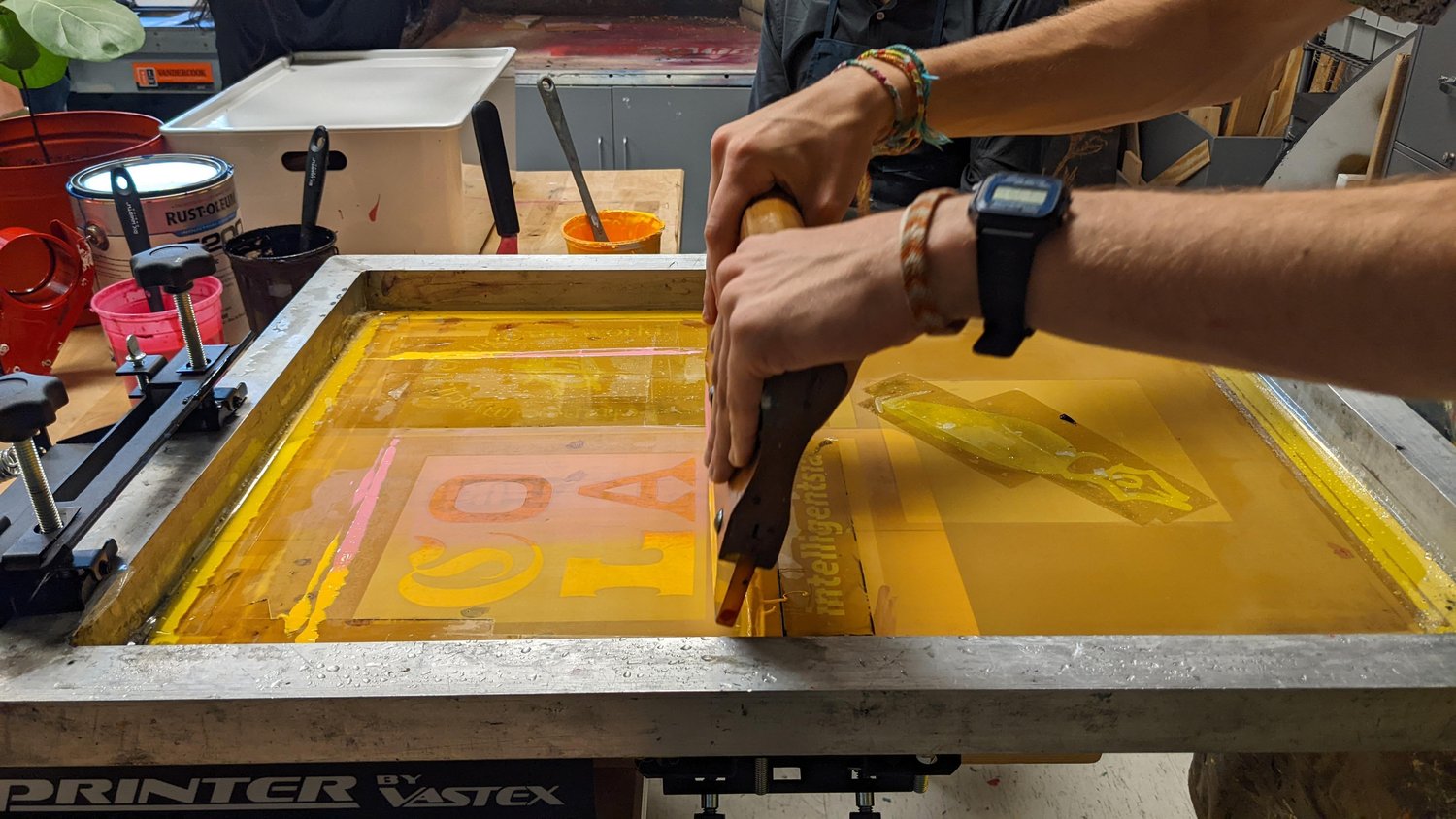 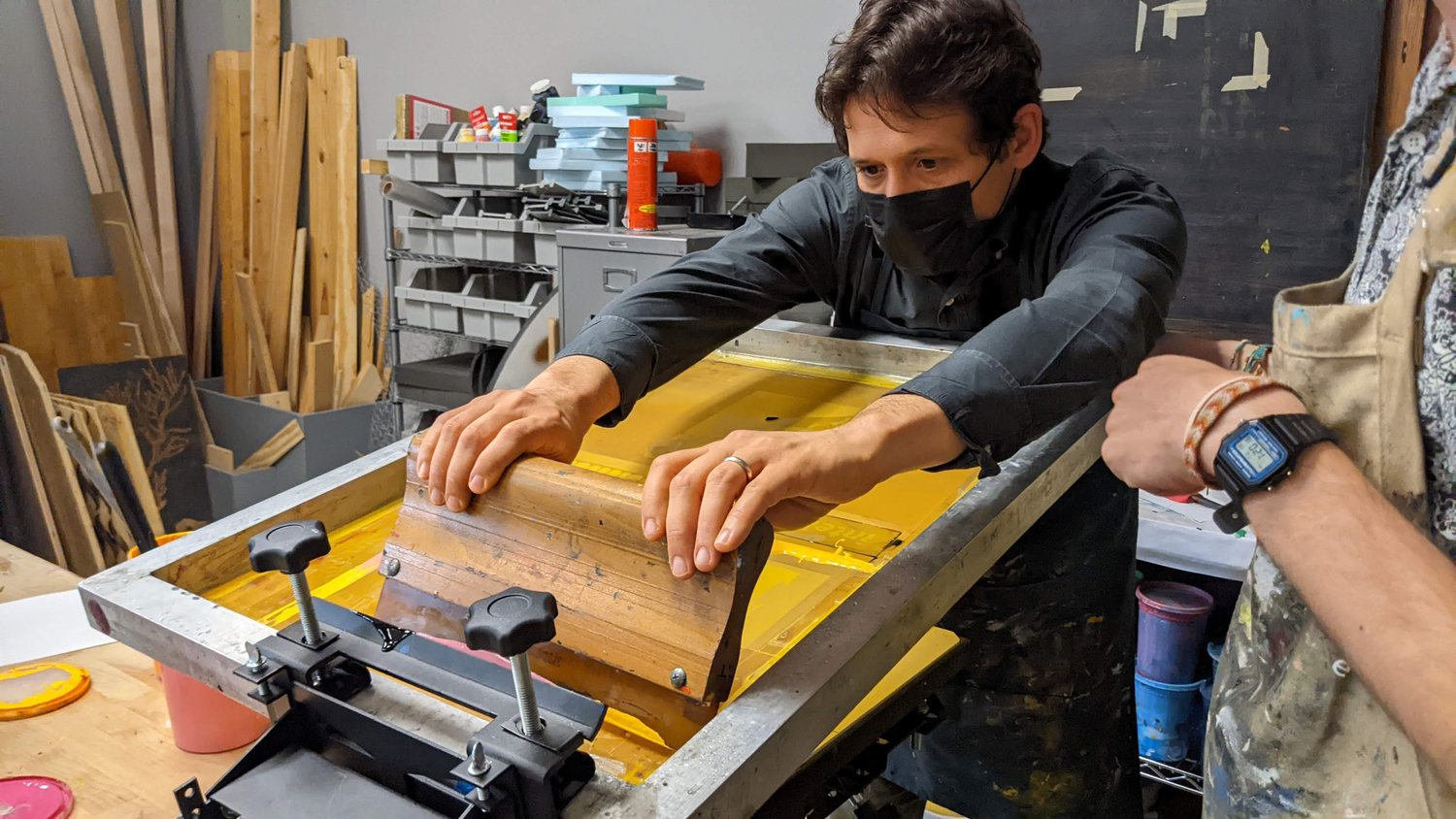 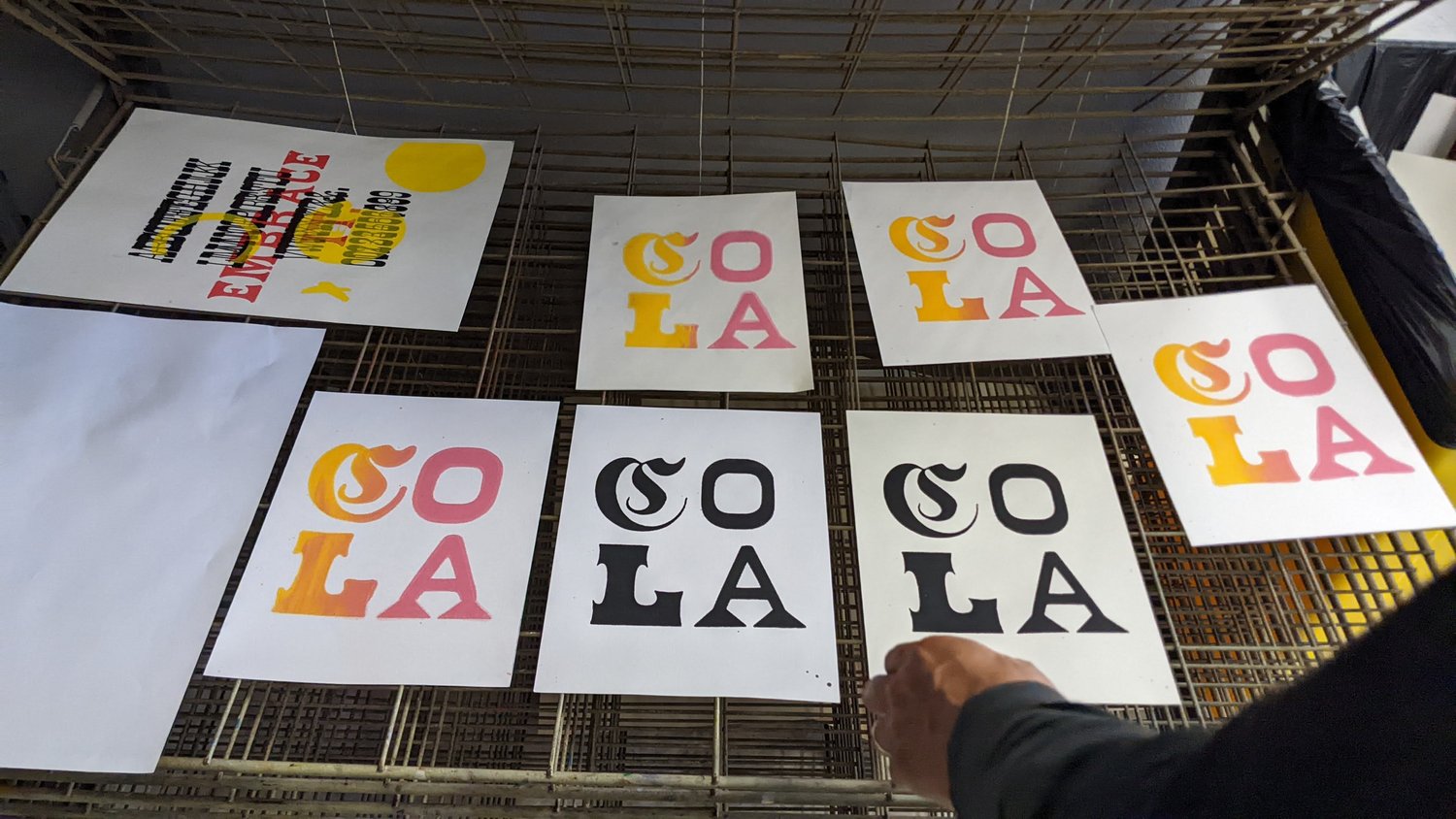 The final concepts not only delivered the original ask, but expanded as the research proved that more was to be explored and delved into. In response to the research and ask, we designed three deliverables to the college:

See this project featured on the wkrm website here.